The girl who speaks bear by Sophie Anderson 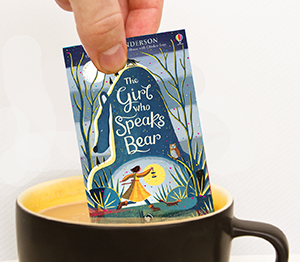 Yanka is aware of the differences between her and the other people in the remote village on the edge of the Snow Forest.  She’s got a lot of unanswered questions in her life stemming from the fact that for the first two years she was brought up by a bear, so who or what is she really?  Mamochka found her by the bear cave and took her in, and Sasha is Yanka’s closest friend whom she cares for deeply, but can she be sure they really love her for what she is?  Anatoly is an occasional, charismatic visitor in her home and spins tales of dragons, wolves and animal transformations that spark a kind of folk memory in her own mind.  Soon events come to a head at the village festival, and an accident to Yanka leads to things happening outside her control…her legs have changed to bear legs…and she begins a journey through magical places to confront the source of her difficulties.  She finds new friends in the natural world, wolf, elk, owl, and they form a team of many strengths yet alone they had each been vulnerable.

This is a beautifully told story with imaginative power.  The ordinary fears of a young girl growing up are taken to a fantastic and sometimes scary place and Yanka is a bold, questioning protagonist who knows she must forge her own path.  It’s a bit like the Wizard of Oz, you must leave home to find out how dear home is to you, and you have extraordinary friends on the way to help and whom you encourage too.  It’s pleasingly constructed with the main story full of dramatic turns interwoven with a thread of folk tales that stand alone but also connect.  These reach a most satisfying conclusion and answer the question of Yanka’s origins.  The House with Chicken Legs, Sophie Anderson’s first novel, even makes a reappearance which will please her fans.  I think I actually prefer The Girl Who Speaks Bear, perhaps because the first book was a little ghoulish for me.  What do you think?  This book is part of a genre of Russian or northern European tales with a vaguely historical, folky, mystical place in the deep woods quality.  Others to recommend are Wolf Wilder by Katherine Rundell, The Wolf Princess by Cathryn Constable, North Child by Edith Pattou, Nevertell by Katherine Orton (is there something about writers called Catherine that calls them to spin Russian stories?).  What other books would you add to the list?

One Response to "(blog) The Girl who Speaks Bear"